Win a pair of tickets and a 100,000 won in spending money to the Redbull BC One world break dancing finals in Seoul!

How to Enter:  Write a short story about an experience you’ve had in Korea (the funnier the better!) and email it to our administration intern at info@gone2korea.com

Contest Rules:  Stories must be original and consist of 400 words or more.  No offensive language, statements or derogatory insinuations.

Contest Deadline:  Entries should be submitted by Monday November 25th.

Winner Selection:  The winner will be announced on Tuesday November 26th.  Four Gone2Korea staff members will judge the stories and score them based on creativity, humor, grammar and originality.

What can I write about?  Anything funny, creative, unique, etc.!  Here are some ideas to spark your inner creativity.

Please be advised:  This is a Gone2Korea writing contest and is not endorsed by Redbull or other parties affiliated with the event. 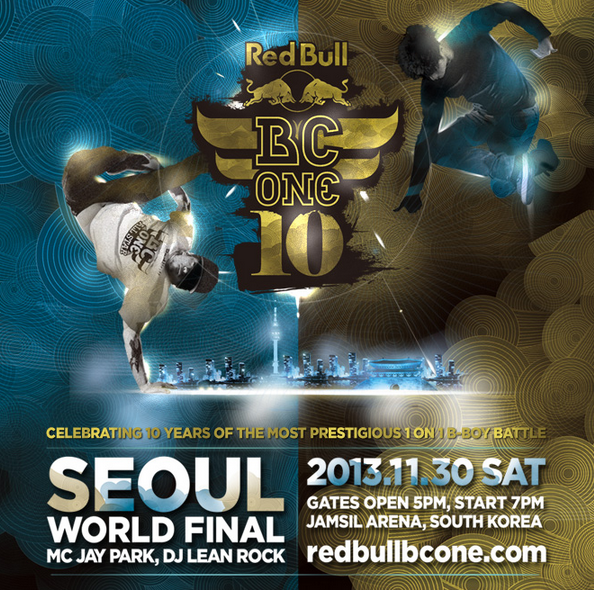 Win Tickets to the Redbull BC One Finals in Seoul

On November 30, the world’s 16 best B-Boys will go head to head in Seoul’s Jamsil Arena to compete for the opportunity to be crowned the Red Bull BC One World Champion in its milestone 10th Anniversary year. After nine months of intense one-on-one battles across six continents, in a record 53 countries, more than 2,000 B-Boys have competed in the hopes to secure a place in the World Final alongside the past eight champions.

The 2013 Red Bull BC One World Final will celebrate the past decade of breaking as a global culture, as well as showcase the talent, skill and support now found in the South Korean scene. The stakes have been raised even higher by the inclusion of two world-class Wild Cards entries, Red Bull BC One All Star Taisuke, from Japan, and high-flying Dutchman Menno, who are both eager to show why they deserve a shot at the title.

The past champions will each look to cement their hard-earned places amongst breaking’s all-time elite. Last year’s World Champion Mounir (France) arrives as a strong contender, but will face fierce competition from the likes of Brazil’s Neguin, American legends Omar, Ronnie and RoxRite and the only two-time champion, France’s Lilou. Meanwhile local heroes Hong 10 and Wing will hope that a wave of home support will carry them to victory.

Yet they will be up against the scene’s freshest talent with six Finals Champions, each seeking to make an impression on one of the biggest nights of their lives. B-Boys Arex (Colombia, Latin America), Gravity (New York City, North America), Lil Zoo (Morocco, Middle East Asia), Froz (Italy, Western Europe), Robin (Ukraine, Eastern Europe), and Nori (Japan, Asia Pacific) have shown themselves to be the best in their respective regions, but must now prove themselves against B-Boy’s true greats.

They will each hope to show the skills, rhythm and style necessary to impress the all-knowing judges El Niño (USA), Lamine (France), Poe One (USA), Storm (Germany) and Ducky (South Korea). The who’s who of B-Boy royalty, the judges have been tasked with the challenge of naming a single winner in the elite line-up.