I know it seems like Bingo is an obvious choice for a game to any teacher, especially us ESL teachers. However, I’d like to revisit this life-saving game and explain alternative ways of playing bingo that spice up the normal routine.

Bingo with – listening ,reading and finding

I have never ever played a bingo game with only words that I will simply read out. There’s always a twist. This is because I always want a challenge within the game, a extra test of understanding. For example, my grade 6’s have just finished the unit on “How do you say it in Korean?” This unit was all about talking about Korean traditional items and customs in English. It’s a useful unit I believe as I learnt a few things about Korean culture and the students had me to practice with as their English tourist. To spice up one of our lessons after the text book’s rather boring vocabulary writing activities I decided to play bingo. This was not ordinary bingo though! I mixed it up. 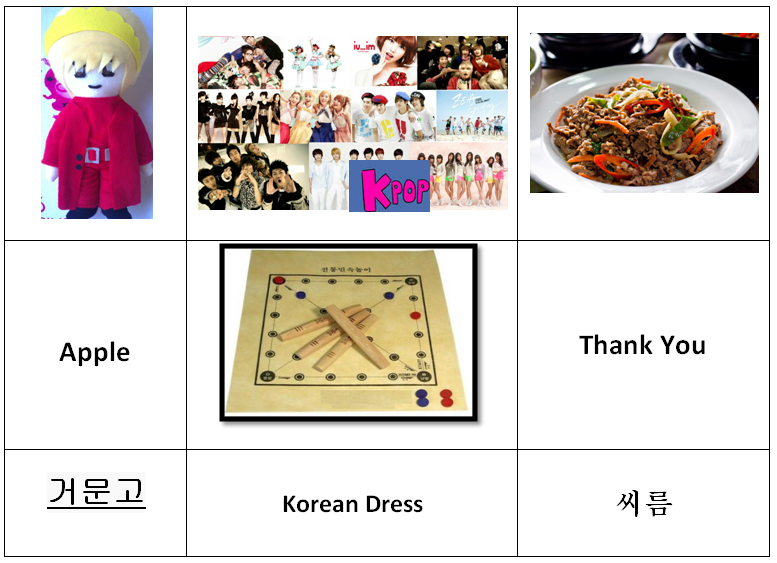 As you can see I have pictures, words and some of the words are even written in Korean.
I don’t usually do Korean words but for this topic it was appropriate. So, if you had this bingo card you would not be listening for “apple” you would be listening for “We say sagwa.” And for the picture of the Yunnori board game in the centre you would listen not for “Yunnori” but for “It is a traditional Korean board game.” Get it? The Korean words work the same, instead of “씨름” (Ssireum), the student waits for “This is traditional Korean wrestling.” I found that the students were actively listening and trying to understand everything I was saying. It was a great game of bingo and I play bingo with other topics using the same multifaceted format.

At first, this particular way I used bingo confused my co-teacher and I had to explain it to her over the break between classes as she couldn’t quite believe that despite the larger amount of preparation I’d put into it, the game was still simply, bingo.
The topic for this bingo game was “She has long straight hair.” This unit was all about looks, facial features, etc. However I was dissatisfied with the text book because it didn’t teach the word ‘blond’ –my students would say ‘yellow hair’. Also, the text book didn’t teach ‘green eyes’ or ‘red hair’. So due to this I felt the need to inject this vital vocabulary into our teaching as soon as possible. And what better way of doing this? Yes, you guessed it –bingo!

So first, in this case the text book actually had an existing table that was used to practice talking about facial features and I took advantage of this page to use as a bingo board for each of my students. This is the page: 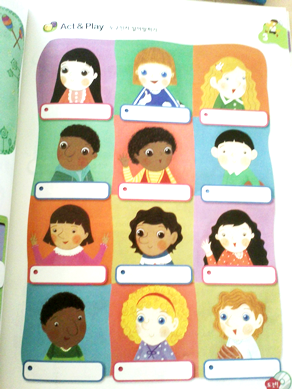 So instead of making bingo boards I asked the students to use this page inside their text book. Before starting we had to write the names of each person and we did this by describing what they looked like for added practice of the vocabulary. Next I made a bunch of my own people, complete with red hair and green eyes so that the students could learn more than blue and brown eyes. Throughout the class I had them projected on the whiteboard and gave each of them names for the students to identify them with.